On Wednesday, February 23, 2012, another of the excellent trips arranged by Ron took place. There was so much interest during the day, but I will stick to the 2012 Olympic facts given to us by our well-informed guide, although she gave us many historical titbits during the day.

Modern Olympics began in 1896 hosted by Athens and, with the exception of the war years, have taken place every 4 years since, in various countries. By winning the bid, London became the only one to host the Games 3 times. Paris would have equalled this had they won. Ticket prices start at £20.12 up to £2012, which includes local transport, there being no cars allowed except for the Press and TV.

The Olympics will be covered by the BBC and the Paralympics by Channel 4. The opening ceremony will take place in the main stadium on July 27 at 20.12hrs and the Queen will officiate.

The area on which the Olympic Park is situated was extremely polluted, hence the soil had to be washed in the “soil hospital” on site to remove any radioactive contaminants, oil, etc. The many small waterways meandering through the site were also very contaminated and were dredged to enable them to be useful. Plenty of debris was removed and these canals are being used to transport some of the materials used in construction.

The flora and fauna were removed temporarily but will be returned later when work has been completed. The whole project is to be the “greenest” ever, with rainwater collected and recycled, solar power, a woodchip-fuelled boiler and plenty of landscaping with trees, plants and wildlife being reintroduced around the site. Unfortunately, the floodlights required for the TV cameras use a massive amount of electricity! The small local firm called 3 Mills TV will be responsible for covering the opening ceremony, when the atheletes will march from an assembly point into the stadium.

There are 88,000 seats in the main stadium, which will be reduced to 25,000 post-Games when West Ham Football Club takes over. The stadium is built in a bowl, the volume of soil removed being equal to 9 times the area of the Albert Hall! Athletics will take place here, but the cycling will be held in the smaller Velodrome, 6,000 seats, which has already been completed, on time and within budget. It has been dubbed “The Pringle” because of its resemblance to that savoury snack!

Near to this is a tent-like building for the basketball. This will be relocated after the Olympics for other sporting events. The aquatic centre, too, is well under way and resembles “Stingray”. All the swimming events will be staged here. The equestrian events will be at Greenwich, with the horses being stabled on Blackheath; the shooting at Woolwich; the Marathon’s 7 circuits in central London; the beach volleyball on Horseguards Parade; the gymnastics at the O2 Arena (no advertising, so it will be renamed for the period of the Games!); the contact sports at Wembley; the road cycling in Regents Park; the Triathlon in Hyde Park; mountain biking at Hadleigh; and the whitewater sports at Broxborne.

Although Bisley would have been the best venue for the shooting, because the Pentathlon events have to be staged close together, Woolwich was selected to enable this to be practical. The Pentathlon comprises running, fencing, riding, swimming and shooting. Likewise, Windsor Great Park was a suitable venue for the equestrian events but was too far from the other sites, so Greenwich was agreed upon. An interesting fact was that a horse ridden in the equestrian events must be the same nationality as the rider, so if a horse is injured, as was Zara Phillips’ mount in a recent Games, it means the rider has to withdraw.

There is to be erected a huge iron construction called “The Orbit”, made in Luxembourg, Spain, France, then Bolton. It will be 150m high, fashioned from recycled metal and weighing 1,500 tons, a feat of technology, engineering and art that will provide a lasting reminder of the Games. It will have a spiral staircase, lift and viewing platform and be open to the public, providing an excellent panorama of the surrounding countryside. This has been paid for by a Russian businessman.

There are to be 11 blocks of flats accommodating the athletes, comprising 2-bedded apartments but whout any kitchens. All food will be provided, national diets catered for and all ethnic needs met somehow for the competitors. Following the Games, this accommodation will be converted to provide kitchens in the 2,800 apartments and half the properties then sold for social housing, the rest to other purchasers. In the main Stadium Coca Cola has the franchise, along with many fast food chains who are sponsoring the Olympics. Local boroughs have responsibility for financing the Games, including Newham, Hackney, Waltham Forest and Tower Hamlets.

The aim of this enormous, expensive project is to be a legacy for London and its inhabitants. Hopefully, this will justify the cost and provide lasting employment and facilities for those financing it.

This is a brief synopsis of our day observing the Olympic Park site, a thoroughly enjoyable and worthwhile trip. Many other facts were given to us of the history of the area, and we also had an excellent meal and plenty of time to stretch our legs and see other local points of interest. Thank you Ron! 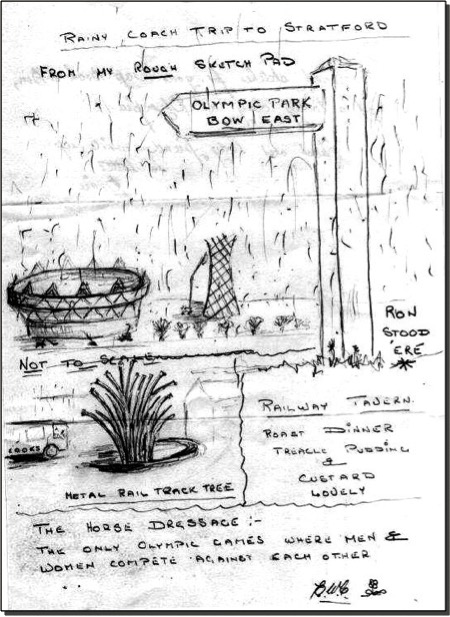